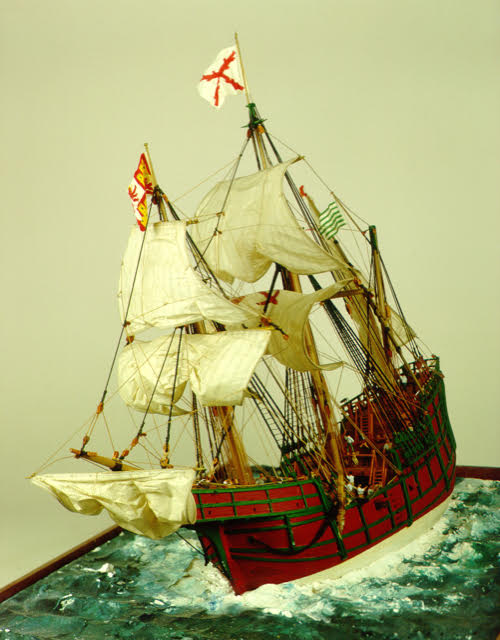 The ships continued to sail on a westward course after several months of seeing only sea and storms. The stern lamp of the flagship lit up a long night during which many men had to pull two guard shifts in a row due to illness among some of their fellow crew members, adding to their fatigue and stress. Morning finally arrived, this time sunny, initiating the complex and frenetic life inside the vessel. While the master was organising the different tasks for the crew, the captain entrusted him with the job of distributing, together with the steward, what few victuals remained, as the rations would barely last a few days more. The water was contaminated, and the wine, which offered considerable nutritional content, had run out –except that kept by the cabin boy in the captain’s quarters. The day’s diet, for the majority of the crew, would be solely made up of a little filthy hardtack, some rice – especially for the ill –a few raisins, vinegar, oil and a bit of water. For the commanders and officers, there was little more. Far behind them were the delicious foods found in the southern lands, recalled by some of the men that morning.

During the first hours of the morning, the surgeon, the barber and the chaplain dealt with treating several of the ill by bleedings, ointments and prayers, but they were unable to prevent one of the most beloved men in the crew – a caulker by trade and a great reader during the evening leisure time – from dying of gum disease, as had happened to the captive from Verzin (Brazil) the week before. Some companions mourned his loss, while at the same time fearing their own death and fervently praying to heaven to find land soon.

At midday, the cook lit the stove in the bow area to prepare the rice, a small shark they had caught at dawn, a piece of leather from the mast that protected the rigging and a chunk of
unidentified meat. An unprecedented silence accompanied every meagre communal meal as they ate the scant food, for the situation was agonising and illness was spreading with
increasingly greater virulence. Only the sound of the waves and the rats accompanied the powerful stench of a deck stained with vomit and urine, making the sensation of seasickness sometimes unbearable.

When afternoon arrived, thanks to the skill and experience of the pilot, the vessel managed to make landfall on a small, somewhat inaccessible island. The joy of the sailors was matched by the din of the bombards and the relief of the captain, who had feared a mutiny would shortly take place. A few men decked out with crossbows, shotguns and bucklers reached the beach in the skiffs to secure the area. After the chaplain said mass on land, the crew finally stocked up on firewood, fresh meat, coconuts, hens, mussels, water and other victuals and supplies they traded for with the native population, almost always in exchange for glass or metal. The captain had the master make an account of everything loaded that afternoon. He also ordered the carpenter, the remaining caulker and two coopers to repair a damaged part of the hull.

That night, the men talked of the strangeness of those peoples, of their clothing and lifestyle, as well as the women they had been with over the course of the crossing. They compared the broad, hooded loose shirts, caps and wide breeches of the sailors with the almost complete nudity of the Indians. They also wondered if there might be gold or some unexpected plunder that would allow them to escape the misery of their lives on earth. A few even played a lively game of cards or dice, something which did not much please the captain due to the disputes which arose, the language used and the bets they made – sometimes they played not only for their rations, but also for their clothing, guard shifts or anything that could be traded or sold. They all remembered the blade wounds two men had inflicted on each other a few weeks earlier over a marked card, leading one of them – known for his terrible stench – to die, a very common occurrence due to the lack of hygiene and cauterising material.

The singing, jokes, games and talk continued on land far into the night. They also remembered those that had fallen within the makeshift structures made out of island wood. The island had saved the expedition, at least for the time being. They would remain there for several weeks, evangelising the population who lived there and stocking up on enough supplies, before taking to the sea again.