PhD in History of Art

It is the year 407. The Germanic peoples cross the Danube and the Rhine, and with this comes the collapse of a brilliant civilisation, the Roman Empire, which had been the result of several centuries of culture, and above all, Romanisation – assimilation of the conquered peoples into the customs of the victor – in a territory whose limeschanged according to its conquests. 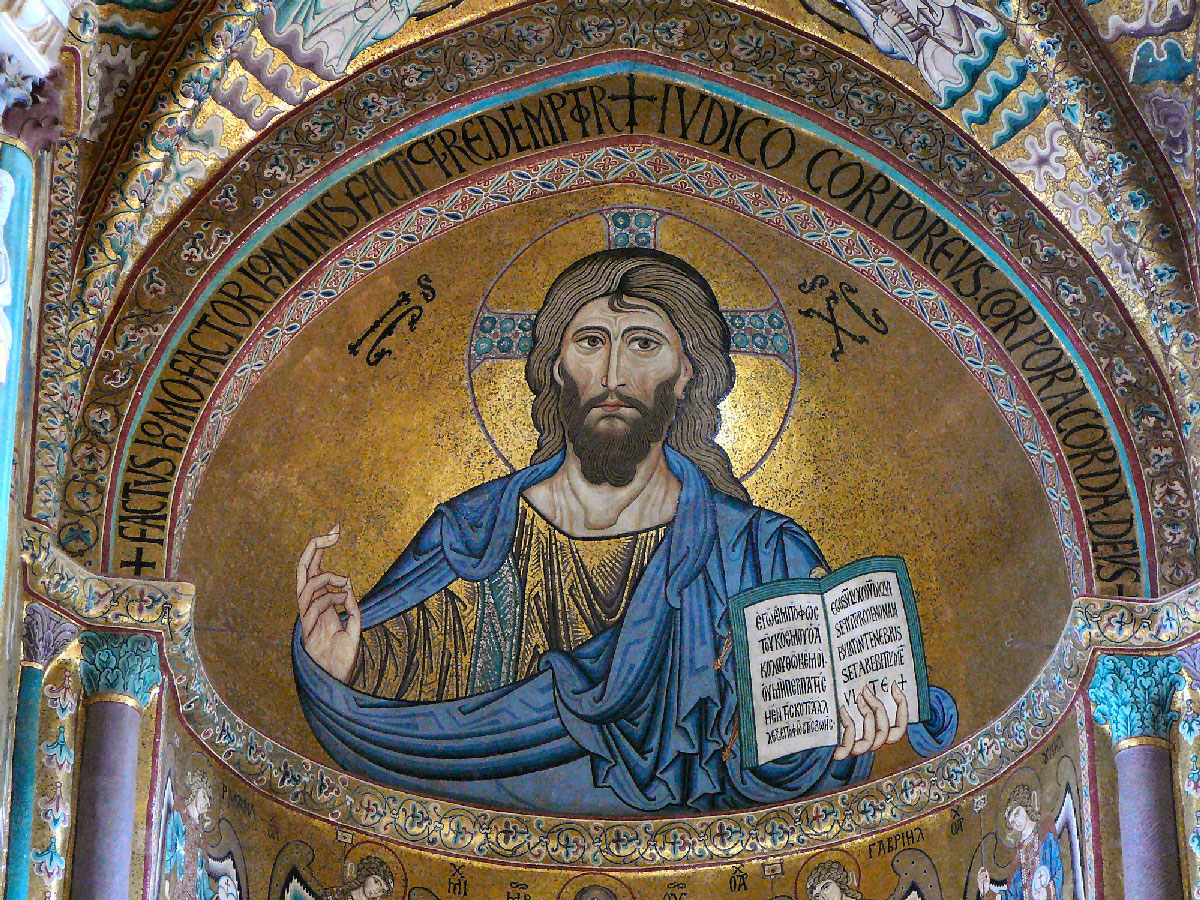 Roman unity thus finds itself fragmented by the waves of barbarian peoples occupying the western part of the empire. In the East, however, the Byzantine Empire is undergoing a brilliant expansion which reaches its zenith in the 6th century under Justinian. In the 7th century, the Arab armies come out of the desert, and in less than a century, conquer a vast territory that extends from Hispania to Central Asia. Their vehicle of unification will be their religion, Islam, whose fundamental precepts include the holy war. Around the year 970, the Seleucid Turks of Central Asia convert to Islam. They occupy Baghdad in 1055.

Until the 11th century, Europe becomes a bastion threated to the south by Islam, to the east by the Hungarians and to the north by the Scandinavians, while at the same time, beyond the Urals, the great Asian empires become established. There was thus a need for a unifying idea that would lend the rulers a common identity over and above geographic boundaries and borders. That binding element was found in religious action, what was known as the ‘crusading spirit’, which consisted of a call not only to free the Holy Places from the power of the enemies of the faith, but also to send Christian knights off to die for that God who was depicted on the façades and apses of Romanesque churches and monasteries, seated on a throne, the world at his feet. (Fig. 1. Pantocrator at San Clemente de Tahull)

With the coming of the 13th century, the disunity of the European forces and military failures will cause the dreams of reconquering those distant lands to vanish. Saint Louis, the king of France, who launched the Sixth Crusade, is captured and a ransom must be paid for his release. However, he does manage to bring back a thorn from the crown of Christ as a relic for Sante Chapelle in Paris. His cousin, the Castilian king Fernando III, seizes Córdoba and Seville from the Muslims (1236–1247), while the Aragonese monarch, Jaime I the Conqueror, occupies Valencia and the Balearic Islands (1229–1245). Anew Christian expansion is underway, then, coinciding with the boom in trade and the resurgence of cities following a dark period of starvation, fighting and endemic disease.

Europe had been eclipsed by the more advanced civilisations of the Middle and Far East, which dominated international commerce. For that reason, the main aim of late medieval European explorers would be the search for cloth, jewels and especially spices, which were highly prized. With this they sought to emulate the ideals contained inthe old chansons de geste and the more recent chivalric novels, to reach the exotic locales that the Venetian Marco Polo described in his Travels of Marco Polo
. Despite Aragon’s incursions into Sicily, Athens and Neopatras, Western traders did not have direct access to Asian markets. This became even more true after the Turks conquered Constantinople in 1453, definitively blocking access to the Indies from the west. In the 15th century, European navigators had investigated new routes to Asia with the assistance of portolan charts – such as the one producedby Majorcan Abraham Cresques in 1375, which shows Asia from the Caspian Sea to Catay, information undoubtedly gathered from Marco Polo (Fig. 2. Cresques portolan chart) – and new navigation instruments such as the compass and astrolabe 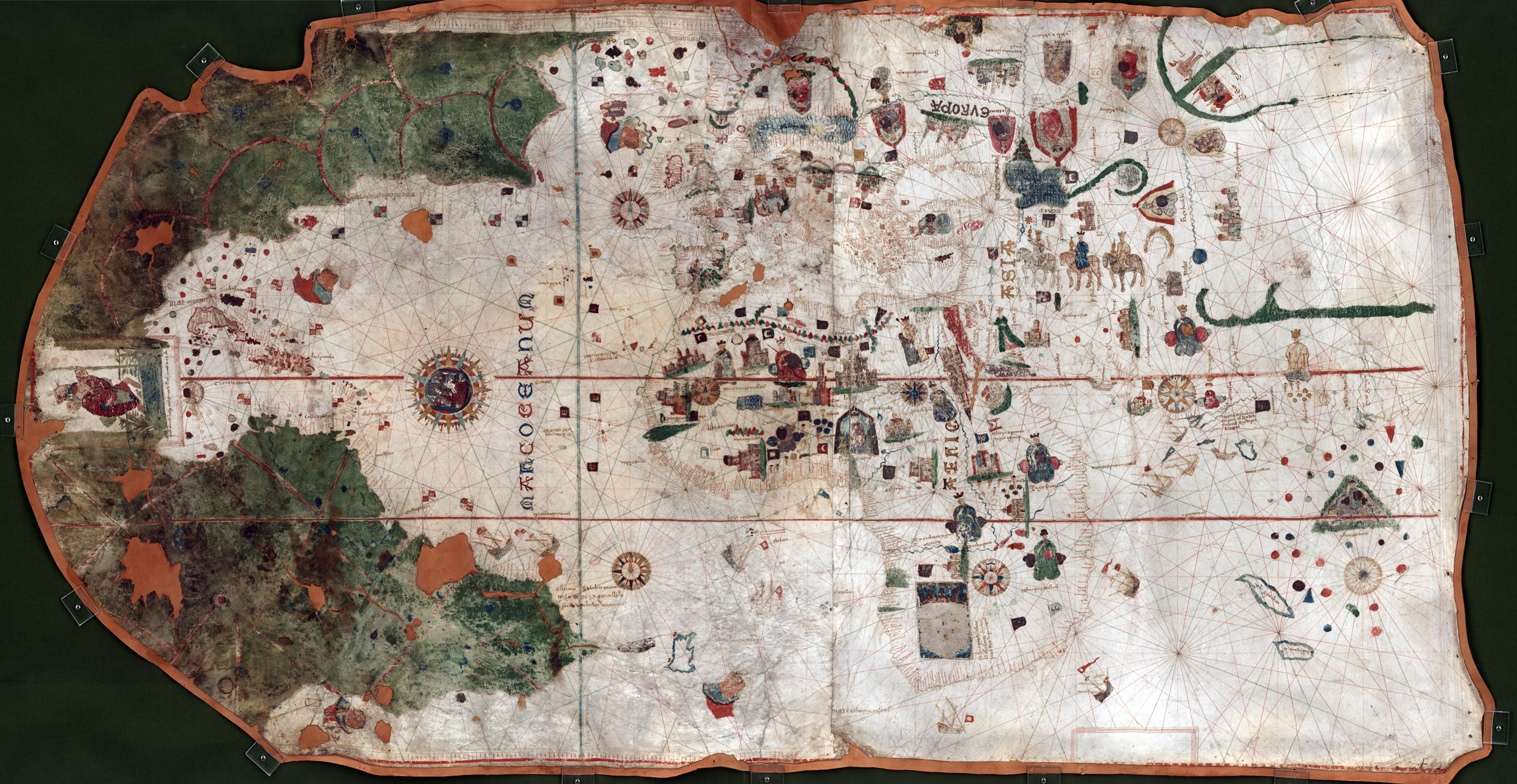 The first to undertake these ventures are the Portuguese and the Castilians. Portugal establishes several bases on the western coast of Africa to divert slave traffic and thus obtain greater profits. Vasco de Gama rounds the Cape of Good Hope to reach the Indies from his country (1488–1497). And in 1502, the Portuguese monarchs set up a trading base in Goa, take control of Malacca and lay the foundations for a colonial empire in the Indies.For its part, Castile occupies posts in North Africa – exceptional strategic enclaves during the Hispanic empire of the 16th century – and the Canary Islands. Following the voyages of Columbus, it adds the American continent to its possessions, a fact which Juan de la Cosa, pilot of the Santa María, includes in his mappa mundi, intended to show the newly discovered territories to European eyes. (Fig. 3. Map of Juan de la Cosa)